In the last post, I looked at what comes "out of the box" with the Docker support in Visual Studio. While what we saw makes a lot sense for a good "F5" story, it's not that great for an actual build environment.

In a normal build environment, we have not only the components to build and package, but also to run our tests. And for us, tests mean we run not only unit tests, but integration tests that run against a database. Ideally, we'd also test our database migration scripts as well. Combining the two steps means our "build":

I'm going to leave off the last two steps for now, and focus on the "Continuous Integration" part of our environment: 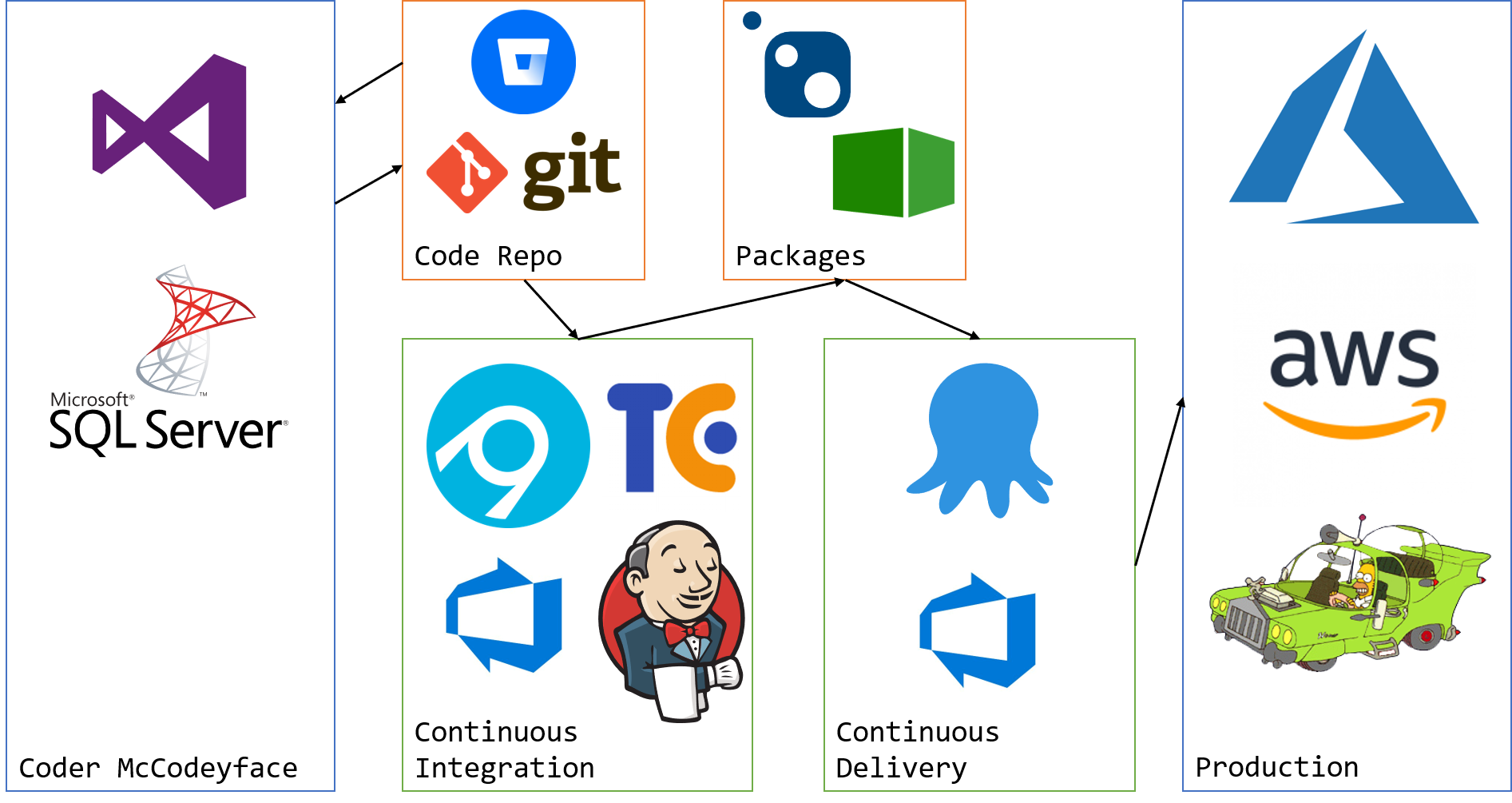 I want to focus on containers for the continuous integration part. Our big decision here is - what exactly is our build environment? We have a few options:

In this approach, instead of trying to add each dependency on our own, we'll just use exactly what the build server uses. Not all cloud providers have this available, but VSTS lets you run build agents as Docker images. They've got a ton available and we can pick and choose our OS and other requirements.

On top of that, they have two separate flavors of images:

There is a problem here, however. It's Ubuntu-only! We want a Windows image, not *nix one.

There are older VSTS container images, however, they're very old, and not maintained.

Suppose we did go this route, what might it give us? Mainly, the ability to run VSTS agents as containers, and more intriguingly, the ability to scale up and down through container orchestrators. But since it's *nix-only, won't work for us. Kitchen sink, sunk.

Just working with a single image can be a bit nicer. We don't have to worry about composing multiple images together into a network, everything is self-contained. So our first step here is - what should be our starting image? To figure this out, let's see what our image requirements are:

Not too bad, but we see already that we have some tough decisions. Container images are great if everything is already there, but because there's no "apt-get" in Windows, installing dependencies is...painful.

First up, how about .NET Core SDK? Is there a build image available, or do we have to start even more fundamental? Well, we've already used a build image for local development, so we can use that as our starting point.

However, the other two pieces aren't installed. No problem, right? Well, no, because Powershell 4 requires the full .NET Framework, and that's not easy to install via the command line. We could install Powershell Core, which is the cross-platform, .NET Core-based version of Powershell. That's not too bad to install into a container, provided someone else has already figured it out.

My other option of course is to eliminate the Powershell dependency, but this means using just plain build.cmd files as my build script, and those are...ugly.

And for SQL Server, there are images, but maybe we just want SQL Local DB? I couldn't find a way to do this strictly at the command line, but there is a Chocolatey package. However, then I'd need Chocolatey, and Chocolatey's requirements are now more difficult for me, it needs the full .NET Framework. I'm trying to keep things lean and only have .NET Core on my build agent, so again, this is out.

At this point, we're in a bit of a bind with a single image. I can certainly bring all the pieces together, but it seems like my dependencies are...many. Bringing in PowerShell 6, the .NET Core version, seems reasonable. But beyond that, adding the additional dependencies makes my container grow ever larger in size.

So for now, single image is out. 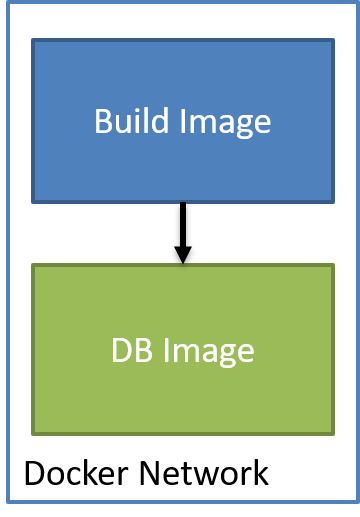 Instead of trying to jam everything into one single image, what if we instead focus on two things:

To build, I don't have a lot of dependencies. Really it's just .NET Core SDK, and PowerShell Core to kick things off. In a future release of the Docker .NET Core SDK containers, the team is looking at including PS Core installed - but for now, we can just create an image to do this ourselves.

Right now there isn't a public image that contains both of these dependencies, so we need to decide which is harder:

Both dockerfiles are publicly available, so I don't have to figure out how to install each. All things being equal, I'd really like to go with the smaller base image. However, there's a wrinkle here, in that in order to add either of these, I need something that can download a file from the web. If you look at each dockerfile, they both use the full windowsservercore image, with full .NET, as one of the intermediate, staged images.

We'll see in the next post, but even though images are cached on the host machine, I do want to make sure I use the right cached images. Using an image that isn't cached, when the images are huuuuuuge, can crater a build.

To be honest, neither option is that great, both the SDK and Server Core downloads are large, so let's just flip a coin and say "start with the Powershell Image". With this starting point, let's look at our dockerfile to create our "build" image:

Not that exciting, we're just copying the .NET Core 2.1 SDK dockerfile and using the Powershell Core docker images instead of a plain nanoserver/windowsservercore image.

To make sure I can run this OK, from a command line I'll make sure everything works:

Now that I have a build image that contains my dependencies, I need to craft a docker-compose file that stitches together my source from the host, the build image, and the database image I'm using in my "local running" environment:

I have two services, my build image ci and the database test-db. Instead of copying the source from the host to the build image, I simply mount the current directory to C:\src. With this altogether, I can run the build inside my Docker environment like:

With this in place (inside a single Powershell script to make my life easier), I can run this build locally, and, eventually, my build succeeds!

In our next post, we'll look at ways of running this build setup in some sort of hosted build environment.

Hot off the presses, with some pretty big breaking changes. For the unfamiliar, the AutoMapper.Extensions.Microsoft.DependencyInjection package is the extension to the MS DI libraries used by ASP.NET Core and others. It lets you do: services.AddMvc(); services.AddAutoMapper(); And this

Today I pushed out the AutoMapper 7.0 release: Release notes This release is mainly bug fixes, but keeping with the last few major releases, has a few breaking API changes. The major breaking API change is breaking out the expression mapping (OData support)